After four rounds of development, and countless hours of research and testing, we have some news to report!

The first soap log (as opposed to the rectangular soap loaf) coming out of the mold!

Yep, that’s the first batch of the finalized recipe for our shaving soap, coming out of the mold for making round cakes suitable for use in a shaving mug!

After giving it an extra day or two to allow it to stabilize, we sliced it into individual cakes (each about 2.5 ounces) and set them onto the curing shelves to allow the water to evaporate and the cakes to harden. 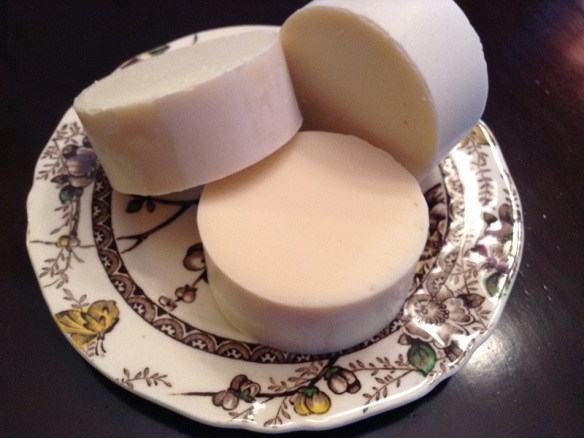 Well dried soap will hold up better to use and last longer than the fresh stuff, and I like to make sure that all my soap has at least four weeks to cure and dry before wrapping.  I might give these just a bit longer on the shelves, as they include a couple of extra ingredients to make them just perfect for use in shaving, whether with blade or electric.

The final recipe is wonderful: full of luxurious, thick lather which builds up quickly and lasts through an entire shave thanks to the rich olive oil and the addition of just a bit of castor bean oil.  As those who have made the switch will already know, pure olive castile soap (weird to have to add that qualifier, as castile soap is *supposed* to be made only of olive oil!) starts out well-suited to shaving because the lather is smoother and creamier, more like a lotion than a typical bar soap, and much less likely to strip the moisture out of skin and leave it feeling dry and flaky.

Just look at all that lather! Imagine how much better it would be if I were a bit more skilled with brush work – it really is an art!

Add a bit of castor bean oil and the experience becomes extra-luxurious, as the castor bean oil works like coconut oil to build thickness in the lather, but without the drying and the allergen content.  Another benefit of castor bean over coconut oil is that the lather isn’t quite as fluffy and bubbly; it’s richer and heavier, much closer to a lotion or cream than other soaps, not to mention that sticky stuff that comes in an aerosol can!  This is much more likely as well to cling to the skin and the base of the hair or whiskers, producing a smoother and more comfortable shaving experience. 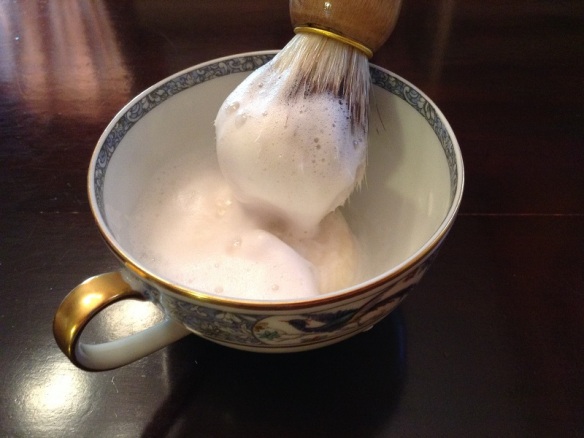 It works just fine for scalps and legs, too, with or without a shaving brush!

One of the things I like most about this recipe is that I’ve worked to balance the oils with a generous helping of 100% pure aloe vera, which helps in two ways.  First, it works with the olive oil to further smooth the path of the razor, preventing razor burn.  Nothing is worse in a shave than a razor that pulls or scrapes the skin, and the extra-humectant properties of the olive oil get a good boost from the aloe so that the razor glides along!

Let’s face facts, though.  Shaving is inherently gonna be a bit irritating to the underlying skin, even in the best of circumstances.  The aloe vera I’ve added helps with this as well, because unlike those soaps that contain only just enough to be able to get a bit of label-bling, we’ve tested and retested until we had the highest possible percentage of aloe to provide a soothing, cooling touch to the skin for after the shave, minding the delicate balance between having enough to really notice the effects but not so much that the resulting product will be too soft to cut and handle.

I’m really happy with it, and I can’t wait to share it with you!